I have been looking at different ways of connecting the different tiers of the robot that facilitates the following characteristics:

So far the most likely candidate seems to be CANbus.

I will investigate further.
kl. 21:36 No comments:

I have advanced my thinking about the power train. More specifically the details for the board that will handle generator stage has converged somewhat. This is the current idea:


The basic API for the circuit should look something like this:

How this circuit will communicate with central command and what will happen when communication breaks down is still to be decided.

Here is a thorough article on the gait of the spider.

The robot will need all the power it can get, and solar panels has been a part of the plan from the start.

However, two problems with solar power has been evident that I have not been able to figure out:


Actually the last point may be a solution to both problems in a wired way, because I just discovered that solar cell manufacturers actually sell left over broken cells cheaply by weight or watt. Since they are already broken they will be less likely to break (smaller pieces) and fitting them into a lattice or grid will provide a flexible layout with the redundancy necessary to sustain power after loosing a single cell.


The plan is thus to buy some broken panels, cut them roughly to size and stitch them together in a grid with redundant connections.
kl. 03:54 No comments:

How are lubricants classified & graded?

After reading the manula of the emco F1P CNC Mill and learning that it recommends 4 different lubricants for different parts of the machine I have attained a genuine interest in learning more about lubricants, so I have now asked a question on the chemistry stack site, asking exactly how they are classified and graded.

You can find it here.

This is my second IOIO OTG. The first one was DOA.

UPDATE: DO NOT ORDER THESE, they were all DOA. Recommended supplier of IOIO is sparkfunn and seeedstudio.

STAY AWAY FROM GEEETECH IOIO OTG

This time I ordered x2 to make sure I didn't get a bad one again (returns takes ridiculously long time sometimes).


It is designed by this guy, manufactured by geeetech and was delivered by dx.com.

It promises to give you access to hardware comfortably from your Java IDE, Normally an idea I don't like but in the name of efficiency I decided to go this route instead of working my way through all the low level C/C++/AVR stuff to get some motors and servos moving.

The idea is to use it for prototyping and when it gets serious I will port my efforts to more robust platforms.

A study of spiders

The decision of copying spiders in the physical design of the robot has spawned some extra focus to the project.

And here a study of the degrees of freedom found in the legs of a spider, summarized elegantly in the two shamelessly borrowed figures below:

Lately I have pondered (in-between the bouts my extremely demanding and satisfying job) about how to model the physical layout of the robot.

I have proclaimed it to be a hexapod from the start. This idea seemed like the most logical at the time. 4 is too few and 8 is too many. Having an odd number of limbs leeds to more complex gaits. Also, keeping the number of movable parts per limb low would reduce the cost and complexity of each limb.

However now I am not so sure any more. I personally like spiders better than insects and spiders have 8 legs. Also, the number of moving parts per limb in a spider (and in insects too for that matter) is much higher than 3. Evolution is the best mechanism to achieve optimization there is, and it has been working for over 4 billion years to perfect the spiders we see today. It follows thusly that one would be unnecessarily stubborn/proud not to at least observe, analyse and learn from the way spiders are.


So I decided  to go all in, and find the perfect spider species to use as a template for the design of the robot. I ended up with the cobalt blue tarantula as the best  candidate for the following reasons:

Since I got my Honda GX25 motor, the task of finding the right generator to make the most efficient and compact generator for the batteries in the robot has lingered somewhere in the back of my mind.

First I thought about using an car alternator for this, but have since found perhaps an even better alternative, namely high-end radio controlled helicopter motors. It turns out alternators weigh a lot and are clunky and heavy, while BLDC motors from modern RC helis are not.

So how would I go about finding the correct BLDC for my project? I got some help here and ended up with the following:

With this as input finding a motor for our project is easily calculated as follows:
(disregarding all the voltage losses etc).

Next I just chuck these parameters into hobbyking's motor finder to get some alternatives, for example the Turnigy SK3 5055-530kv with the following specs:

I must investigate this further to ensure that I don't go buying one of these motors that wont work because of some parameter I did not think of. 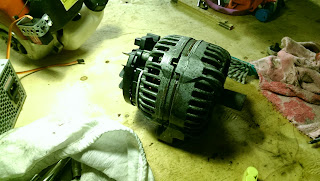 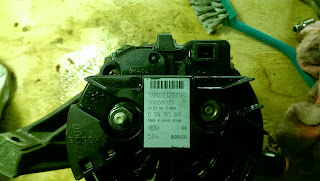 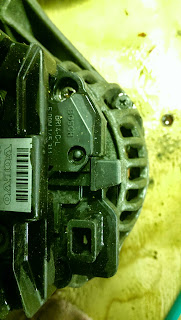 After my last post I have learned alot about step motors. I have also manged to figure out the specs of the step motors found in the EMCO F1P, and as always the quality of this machine turns out to be stellar.

Article on stepper motors courtesy Douglas Jones of the University of Iowa.


The step motors in the EMCO F1P have 10 wires coming out of them. The wires are connected in consecutive pairs, one pair per two oppositely facing windings inside the motor (10 windings). The motor has almost no resistance when turning the shaft in un-powered state. The stator inside the motor has 50 teeth.

This kind of motor is less common, and requires a more complex/expensive driving circuit. It offers higher precision, less vibration and noise and more torque at mid to high speeds than the more traditional 2-phase designs. Also there are more ways in which the driving circuit can drive it.

This has made me determined to keep the motors and find a new controller for them during my retrofit-project.
kl. 23:34 No comments:

Anatomy of a step motor

I decided in the beginning of 2015 to stop spending time on my EMCO F1P CNC machines instead of the main goal of the proejct. Ironically that made me spend more time on the CNC,because I need to get them out of the way quickly.

Long story short, I want to convert one to use a new control board but without sacrificing the step motors. So I have now carefully removed one step motor (Z-axiz) and opened it up to see what's inside it.

Based on what I have gathered from searching around and posting a question on stack exchangel, this motor is most likely a bipolar motor with 10 windings.

Plan for Devol robot project in 2015 is the following: